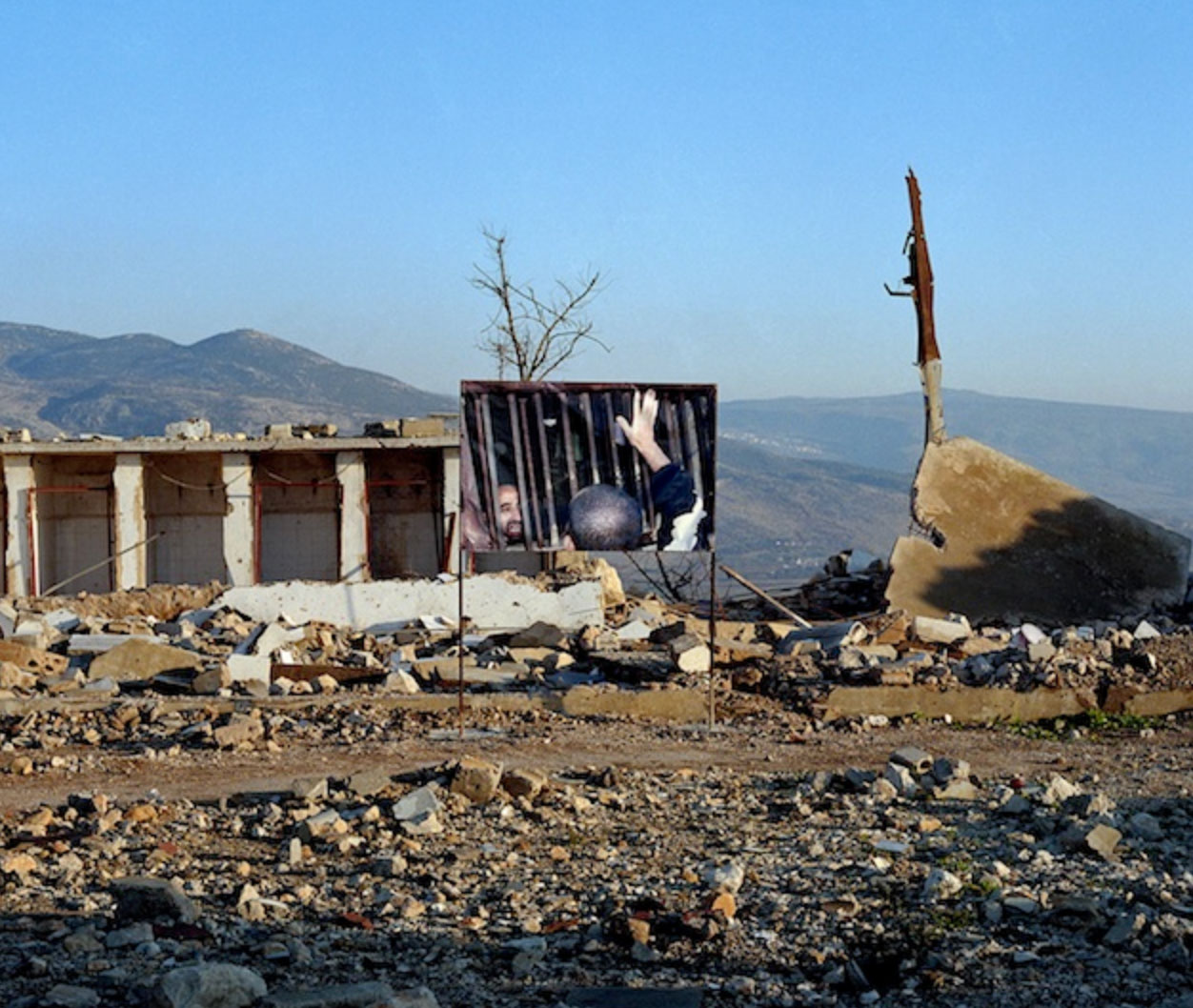 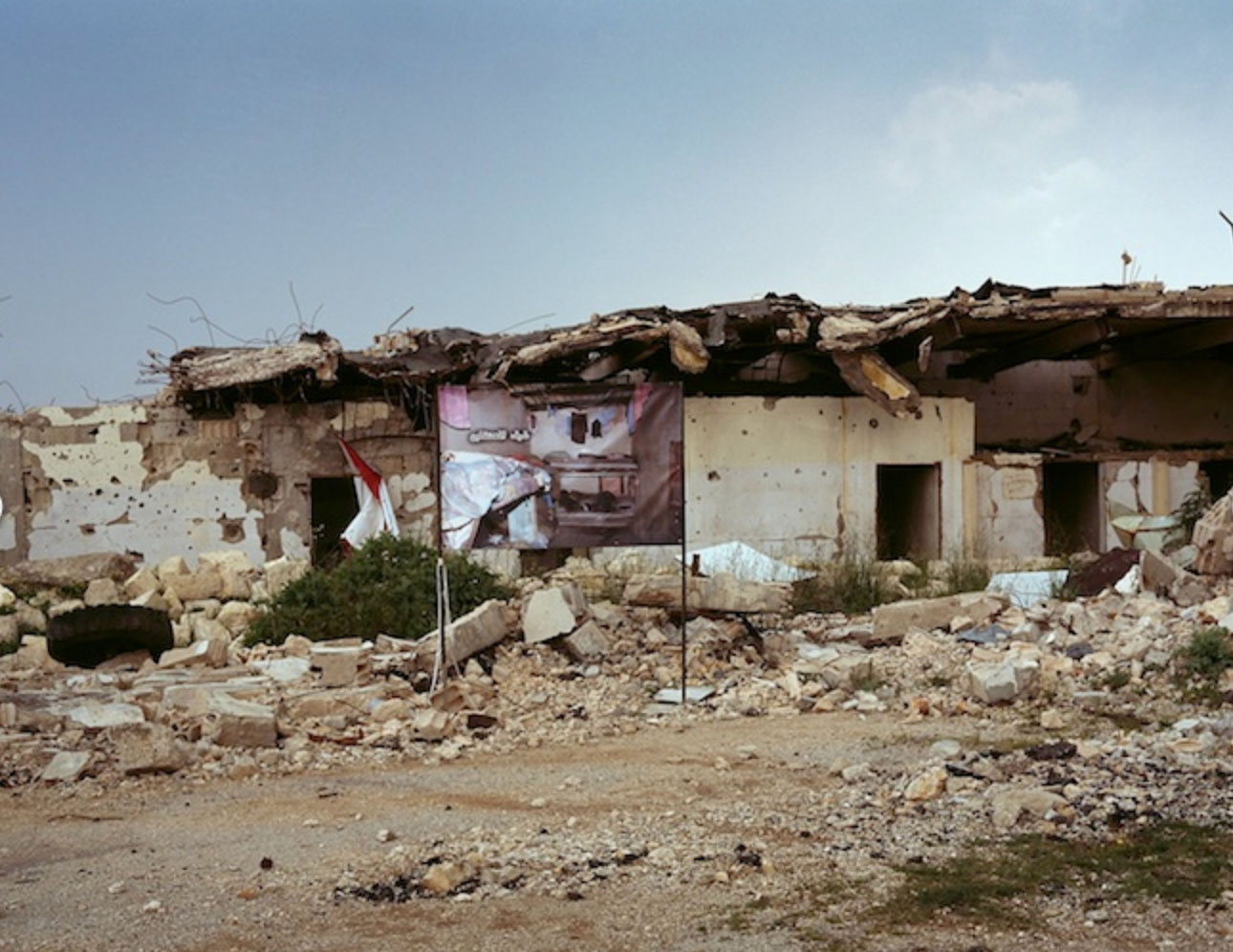 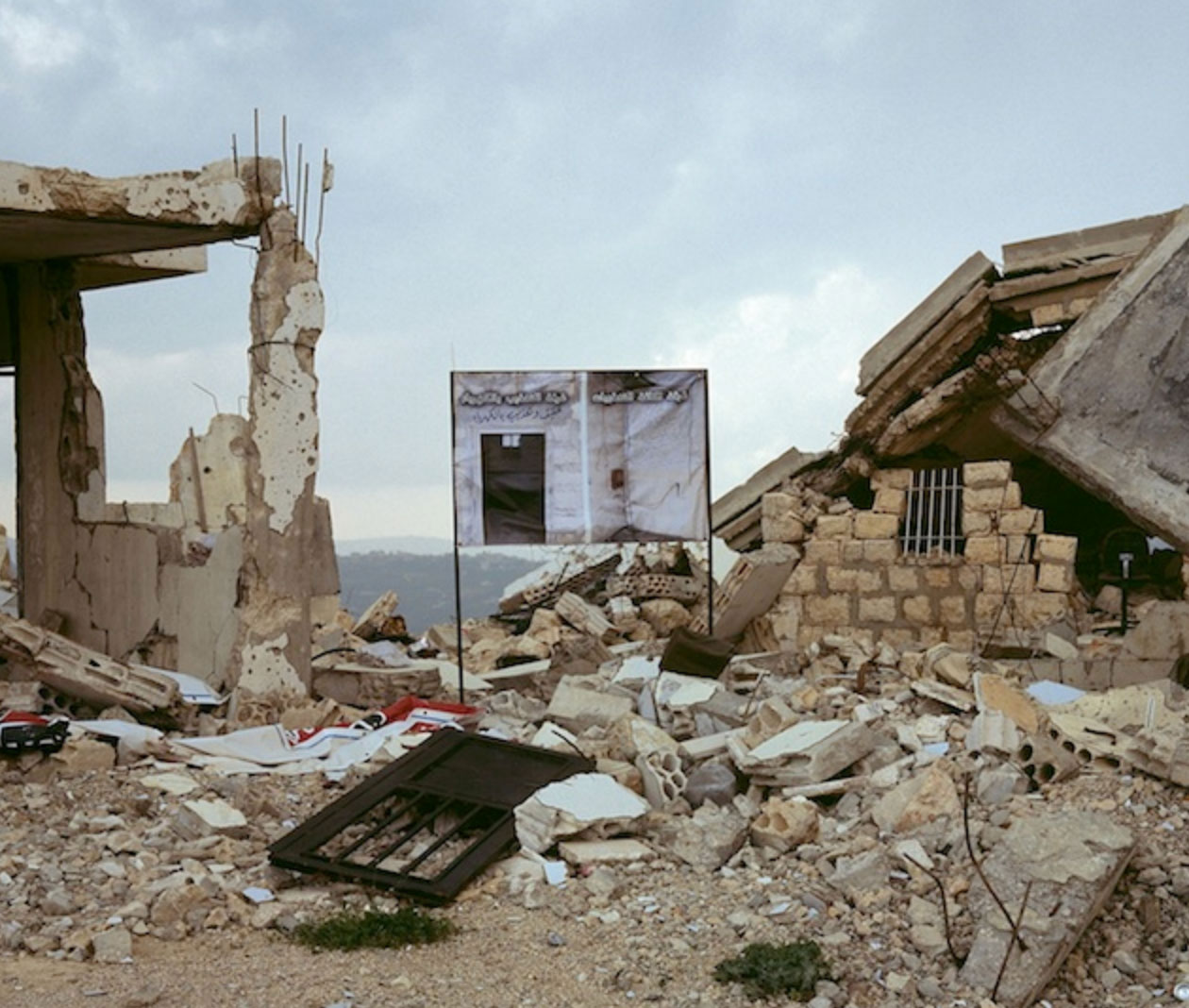 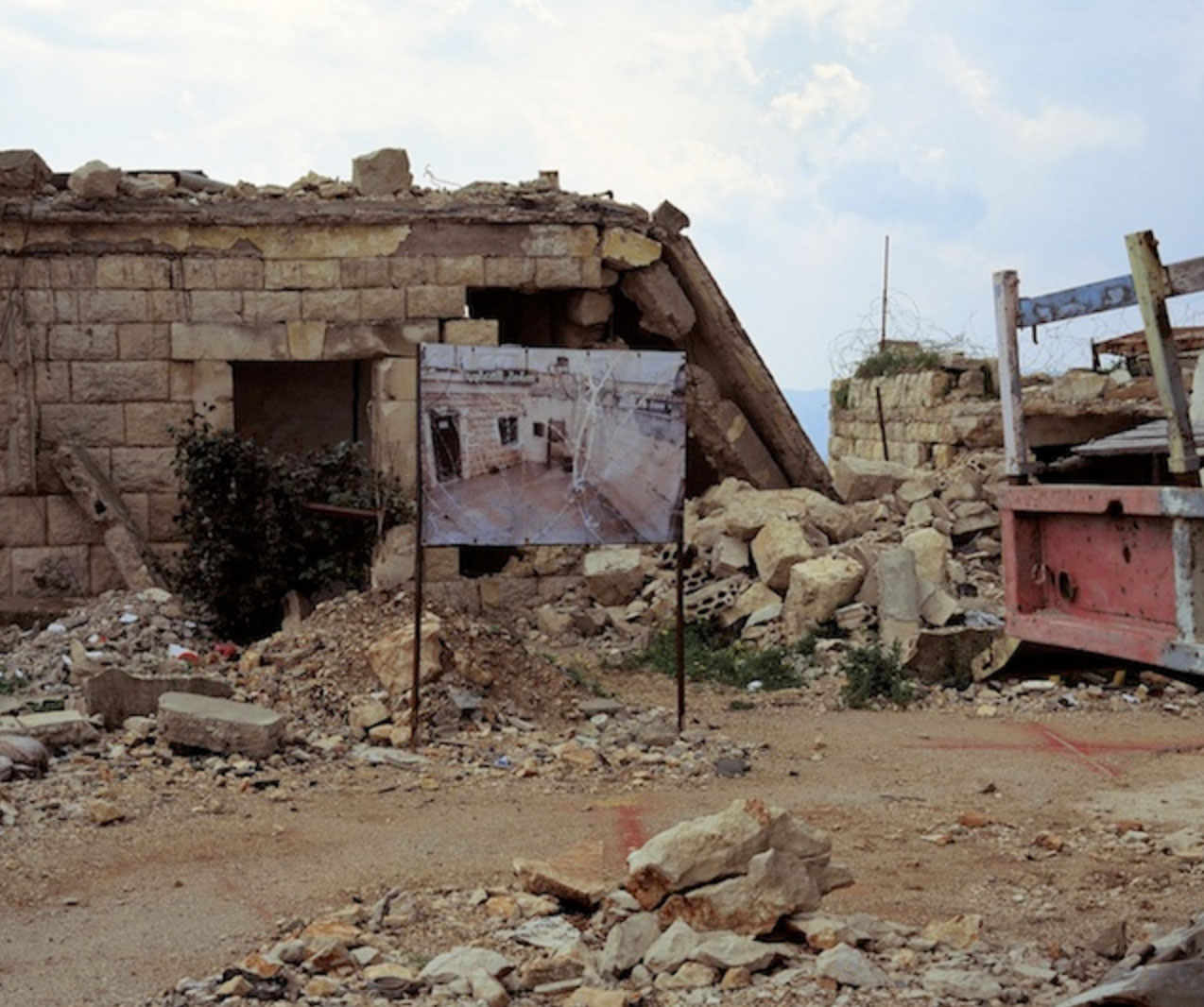 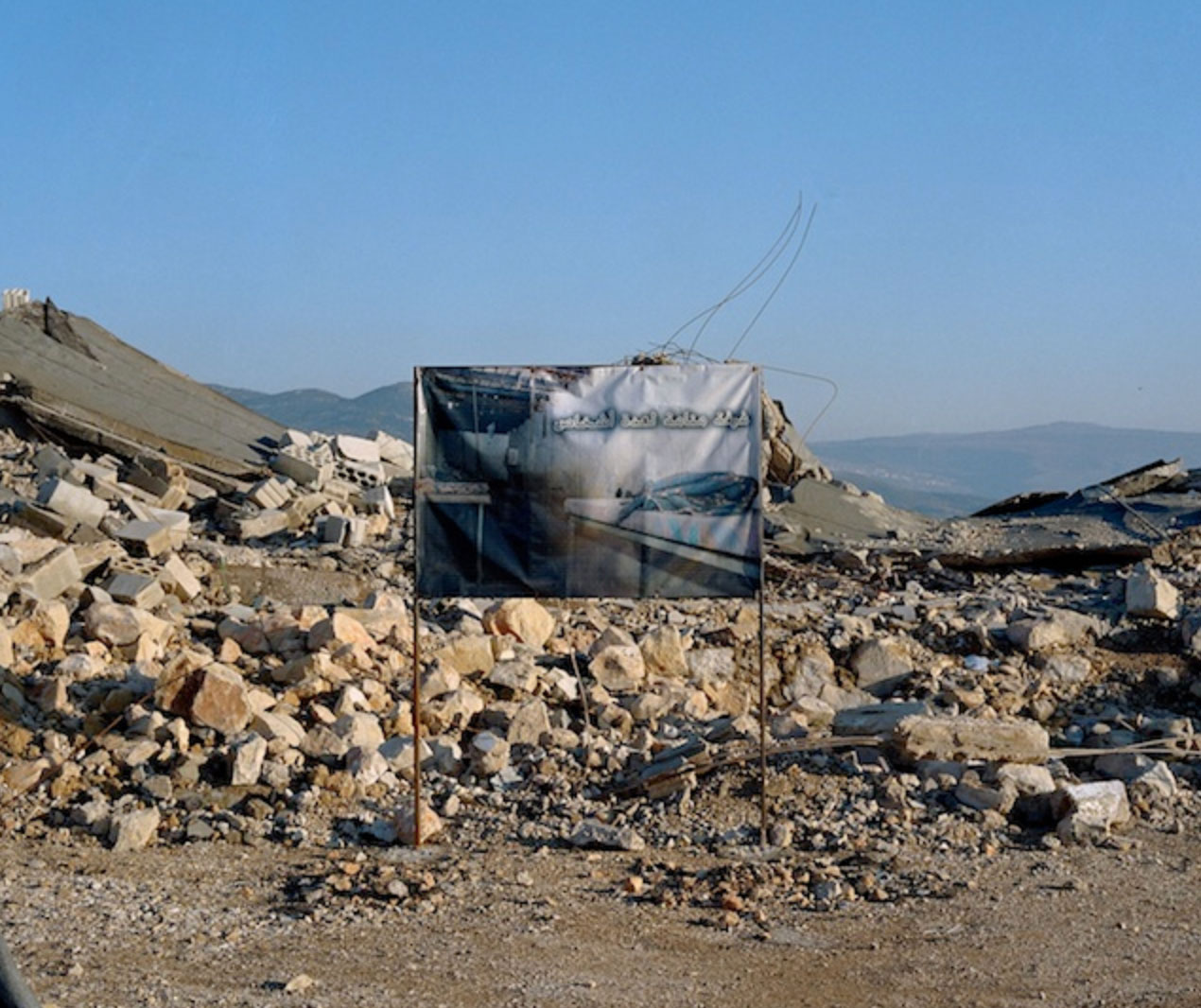 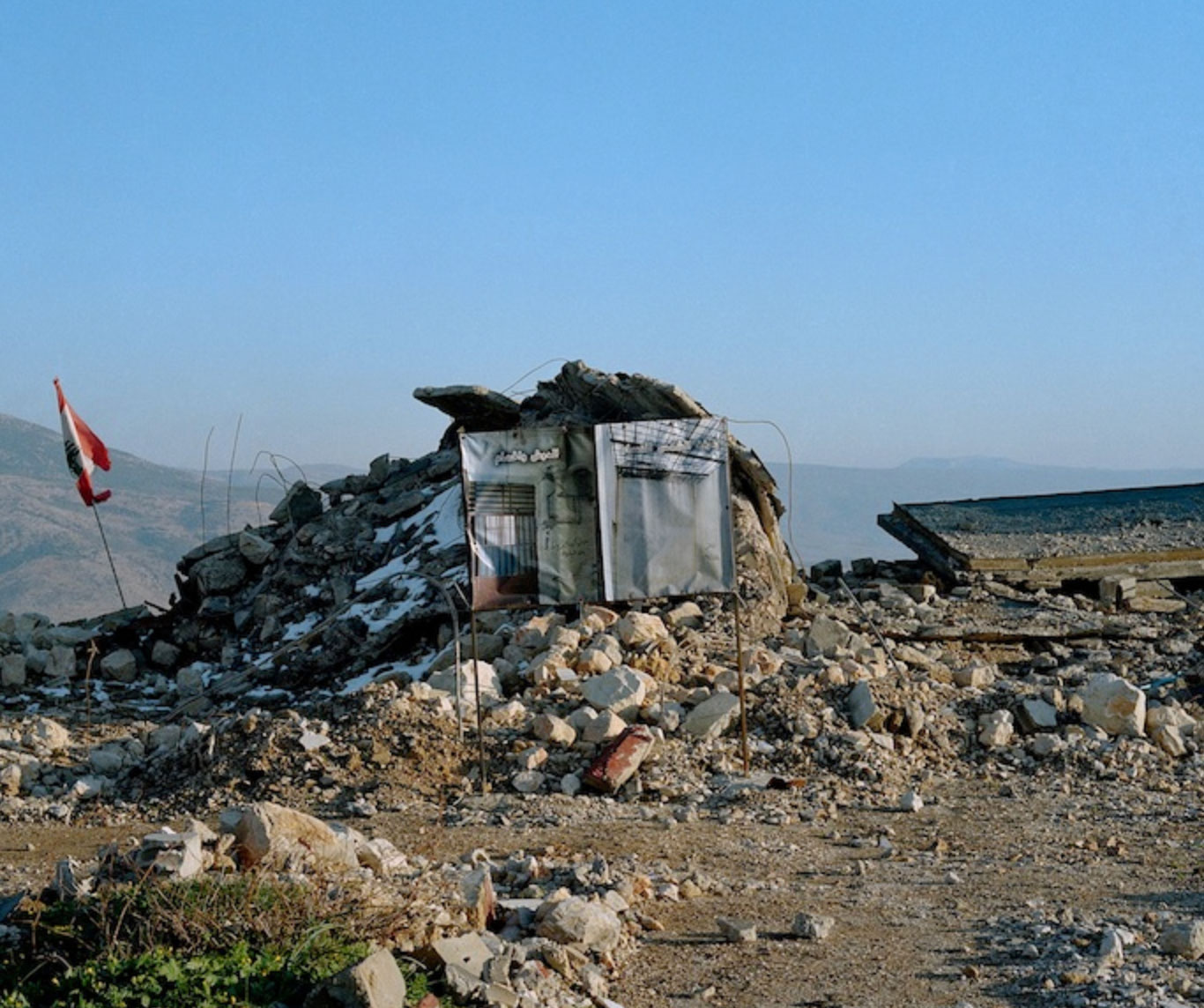 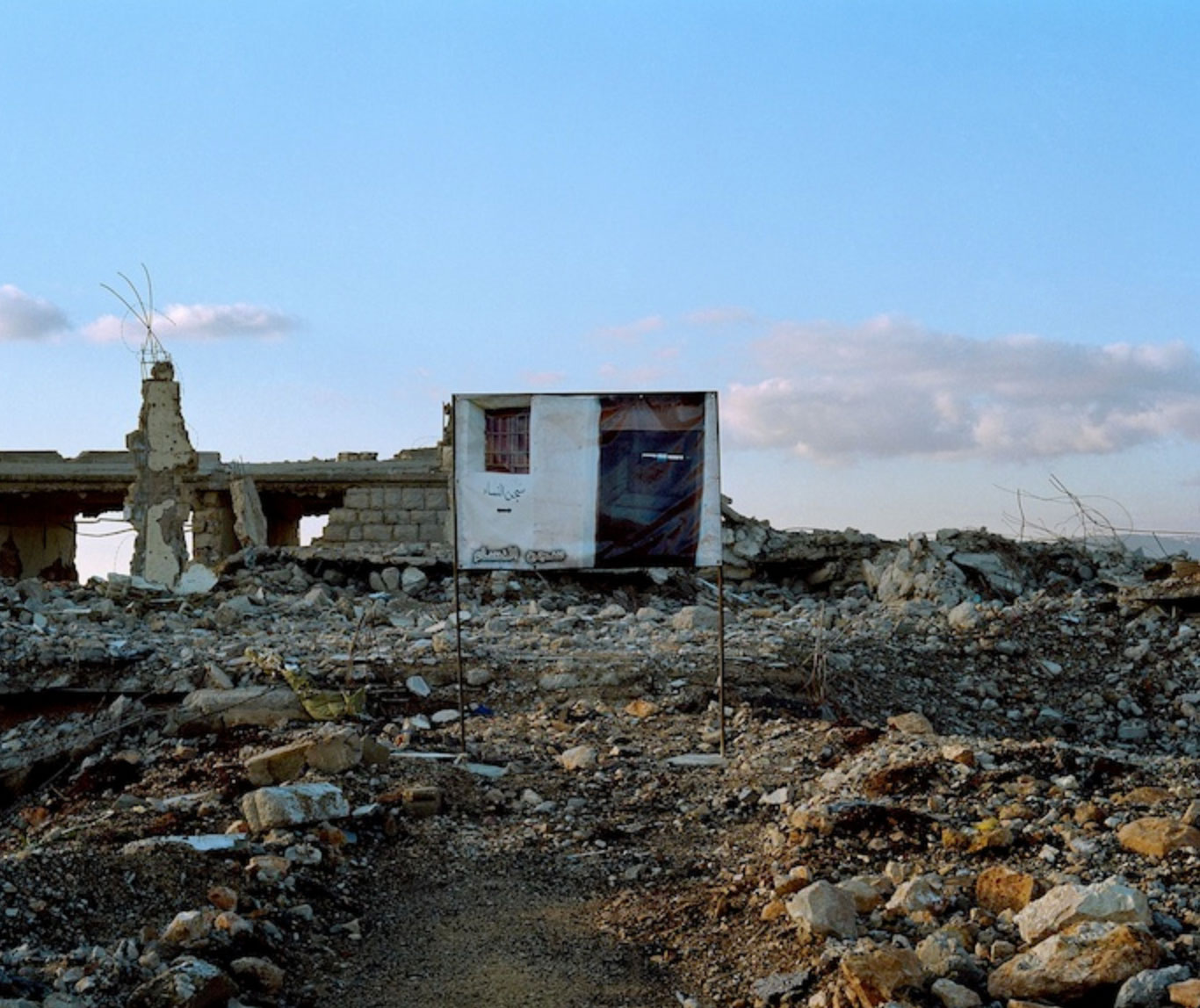 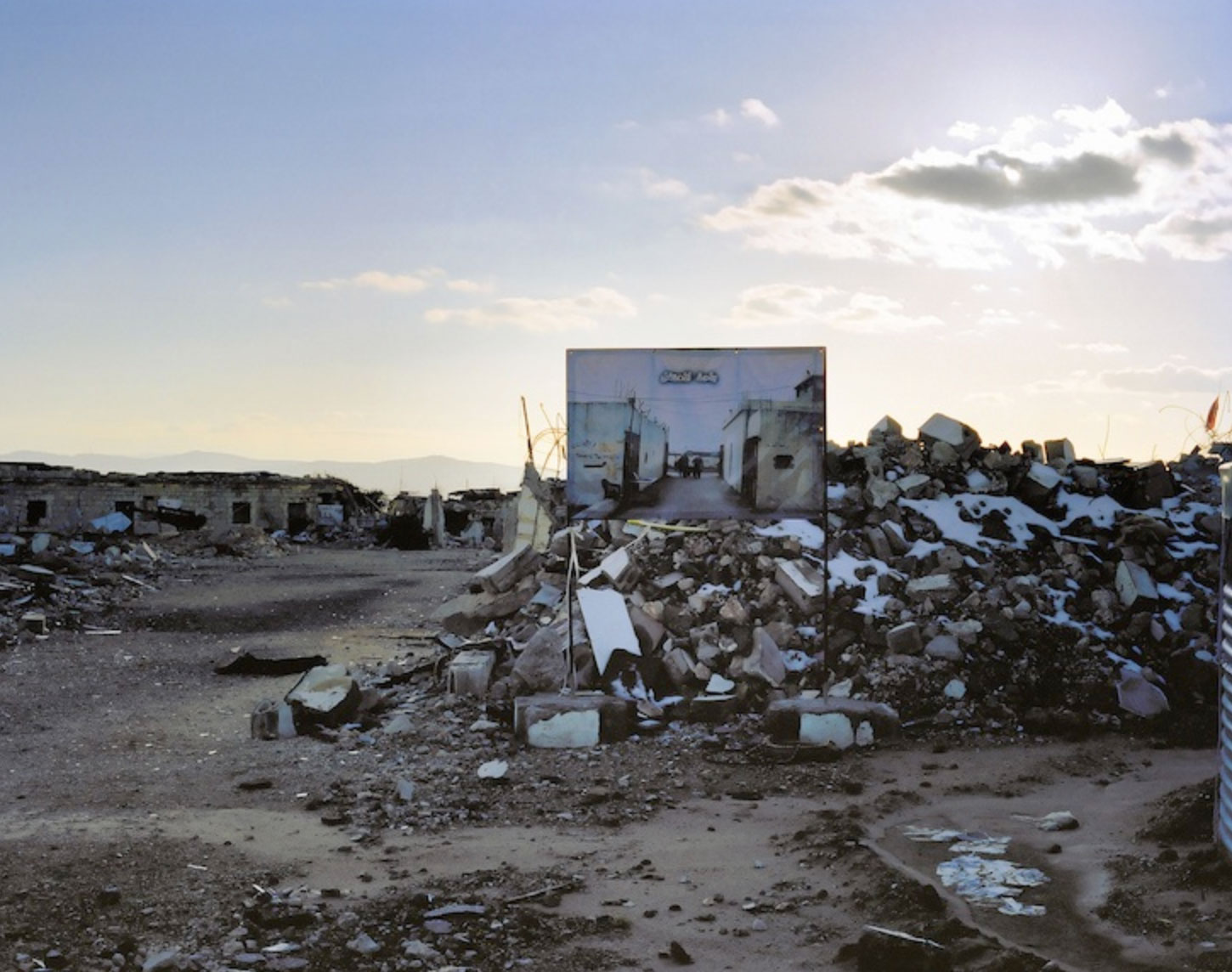 Images via the artists at JOANA HADJITHOMAS AND KHALIL JOREIGE

The fourteen photographs that constitute this series capture the ruins of Khiam prison in the aftermath of Israeli airstrikes conducted throughout the 33-day July War—also known as the Israel-Hezbollah War—of 2006. Yet the principal subject on which the overarching collection seeks to reflect is that of collective memory—how it is preserved or, alternatively, (re)constructed and by whom, and the implications that its politicization carries vis-à-vis history and its erasure. As such, the point of focus within each individual photograph is not in fact the rubble of Khiam detention center, but rather the steel billboard erected in its midst.

Khiam was previously located in what had been a designated "security zone" inside Israeli-occupied south Lebanon. Administered by the South Lebanese Army (SLA)—an Israeli proxy militia—Khiam was used as both an interrogation and detention center beginning in 1985, and its notoriety as a torture camp solidified throughout the final years of the Lebanese civil war. Although the conflict ended in 1990, another decade would elapse before the prison was shuttered. It was Israel's withdrawal from southern Lebanon in May 2000 that ultimately precipitated Khiam's closure, by which time some 5,000 prisoners had passed through its cells.

Hezbollah subsequently repurposed the defunct prison complex, transforming Khiam into a museum and memorial in honor of those whom had been detained, tortured, and killed, or who had otherwise suffered at the hands of SLA and Israeli forces. Yet in the wake of the site's destruction in 2006, Khiam became re-presented once again. Inserted among the remnants of the razed museum were fourteen steel billboards depicting Khiam in its original form—as a prison—at the time of its dismantling six years earlier. With this addition, the site assumed the role of museum once more.

Through this collection of photographs, however, Joana Hadjithomas and Khalil Joreige aim to draw attention to the proactive, political process of image saturation that has been exacted upon the site of Khiam detention center. According to the artists, the repeated interjection of overlapping images denies certain individuals—former prisoners, in particular—the space and the agency to adopt narratives that resonate with their own lived experience. In this way, the steel billboards photographed above embody, as Hadjithomas and Joreige describe, "an artistic installation without an artist."

Landscapes of Khiam thus appears to signal a kind of warning: Stripping the site's physical representations of personal recollections, anecdotes, and impacts risks obscuring and ultimately expunging Khiam’s history from collective memory. How can one relate to history and to memory, Hadjithomas and Joreige ask, "if, when faced with the past," rather than coming to terms with it, we are content to superimpose an image onto the ruins of another, layering "one temporality on another, one reality on another?"

Joana Hadjithomas (b. 1969 in Beirut) and Khalil Joreige (b. 1969 in Beirut) are Lebanese filmmakers and visual artists who have collaborated since the 1990s to produce cinematic and visual artwork. Their projects are largely focused on investigating the complexities of Lebanon's history and multi-layered representations. Such themes appear at the forefront of their 2008 documentary, Khiam 2000-2007, in which six former prisoners describe the cruel and degrading conditions to which they were subjected throughout their detention.

Hadjithomas and Joreige also utilize their art as a medium through which to question "the fabrication of imaginaries in the region and beyond." A topic of particular interest within their work is the role that images play in the framing and consolidation of such imaginaries. They are currently based between Beirut and Paris.