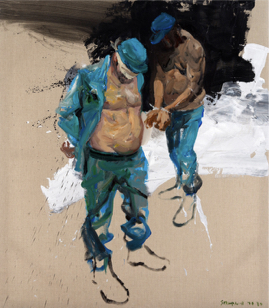 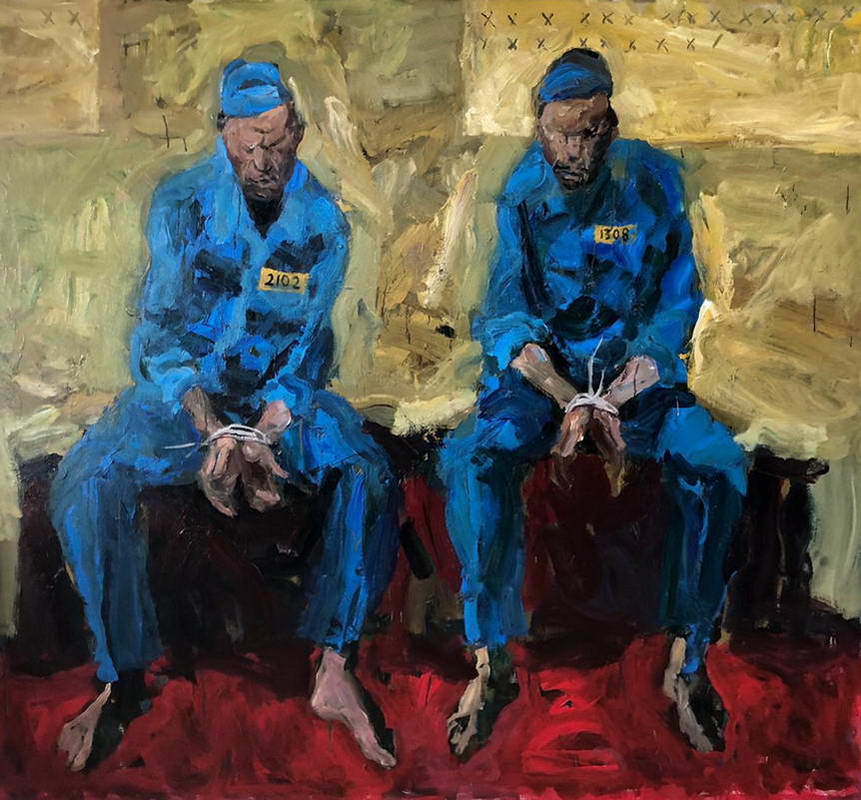 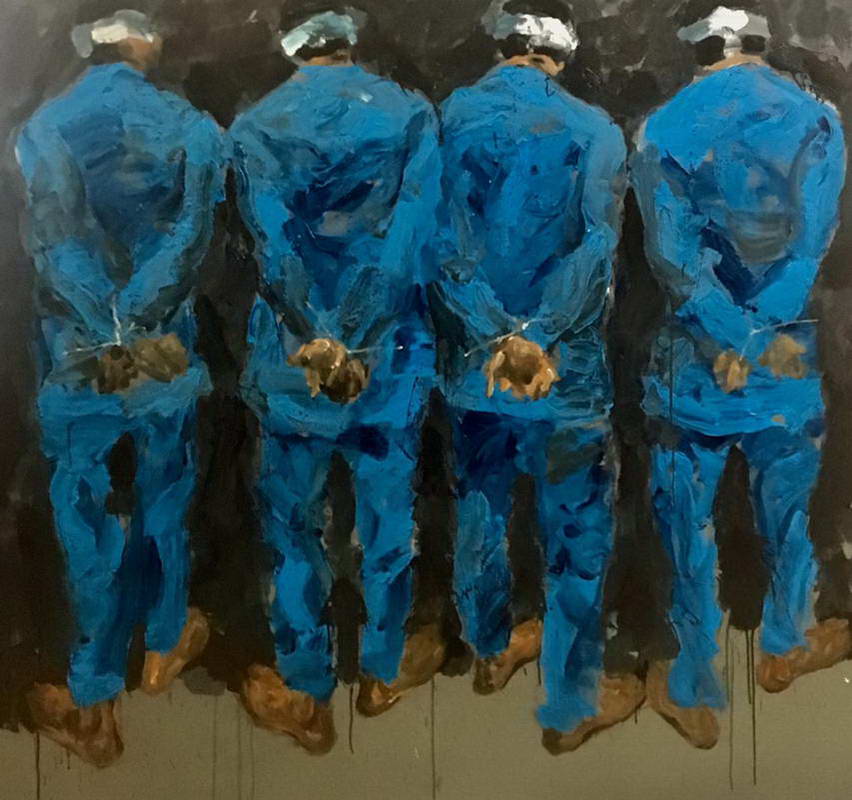 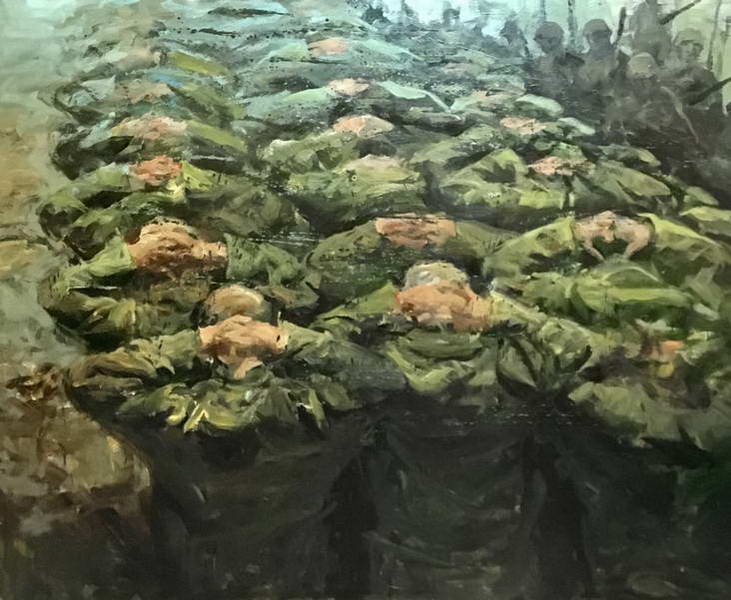 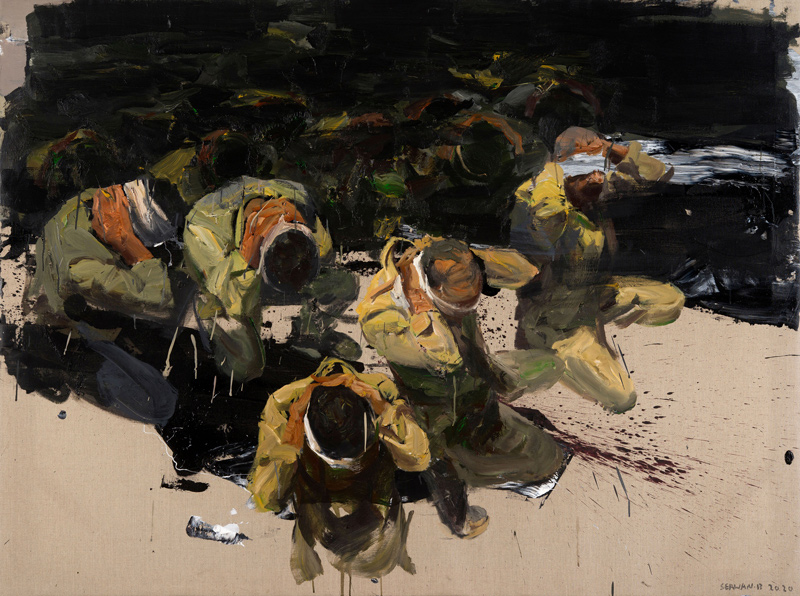 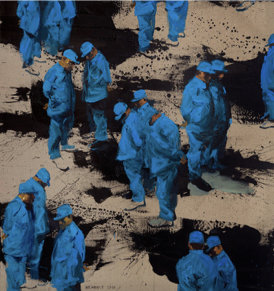 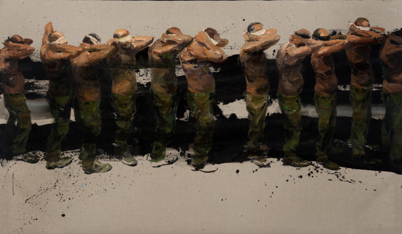 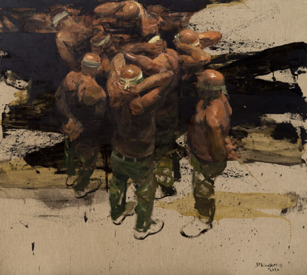 This collection of paintings stands as a counter-narrative to the discourse designed to perpetuate what the artist, Serwan Baran, terms "the trivialisation of violence." Counted among a larger body of acrylic paintings, sculptures, and works on paper, these pieces were displayed as part of Baran's February – April 2020 exhibit, "A Harsh Beauty," which, as he states: . . . is me finally putting forward the idea of destruction, both external and internal.

The "destruction" to which Baran is referring is at once collective and individual, tangible as well as imperceptible, and is the singular, categorical outcome of armed conflict. Made to serve in the Iran-Iraq war as a conscripted soldier under the Saddam Hussein regime, Baran was subsequently forced to work as a "war artist" during the First Gulf War. In this capacity, he was obliged to depict strong army generals and battle heroes, and victories on the frontline—portraits and images that constituted, according to the artist, nothing more than "propaganda." In a 2019 interview with the Ruya Foundation, Baran reflected on this experience: I painted in a realistic style that did not match our reality as soldiers. . . . We were imprisoned by conscription.

It is this reality of imprisonment that Baran has come to associate with the devastation, decay, and loss that war promises—a reality that "A Harsh Beauty" seeks to expose. As the artist has described, the exhibit and its pieces are "all about the ruin, the injured people, the orphans, the war prisoners and martyrs—things which our history has always written about in a false way." Yet war, such as the "lifetime of relentless and never-ending conflict" to which Baran has bore witness, exacts indisputable, incontrovertible effects upon individuals' bodily integrity—not only explicitly, vis-à-vis wounding, maiming, and even starvation, but also via physical manifestations of psychological trauma. It is logical then that Baran would challenge fabricated historical accounts of warfare through the corporal posture and positioning of the subjects he paints. According to the artist, the very essence of the message that these pieces aim to impart in fact "revolves around" the body language of each individual subject, whom Baran identifies as "the captive and prisoner, and the prisoner of opinion." In each painting above, the detainees portrayed are represented in a manner that emphasizes a state of unequivocal defeat and disempowerment. Their heads are perpetually lowered, chins down and shoulders hunched forward, perhaps in quiet resignation or fearful compliance, or perhaps as a sign of an aching sense of desperation or deep despair. Likewise, the prisoners have been rendered physically incapacitated. Their hands are invariably restrained, either with zip ties or pieces of fabric, or forcibly clasped behind their necks or heads. In the vast majority of the paintings, Baran also depicts the captives blindfolded, reproducing in his art the types of 'sensory deprivation' to which those held in various forms of detention are frequently subjected.

In this unmediated, uncensored body of work, Baran aims to generate a process of "refraction"—altering the lens through which we conceive the soldier and his experience in order to ultimately transform our conceptualization of war. In adopting this approach, the artist illustrates that violent conflict is essentially a macrocosm of the individual reality of the imprisoned soldier. Baran is therefore speaking to a sense of multi-layered or double imprisonment: on the literal plane, he is shedding light on the experience of prisoners of war—those captured in combat. Yet, by extension, he is demonstrating that war in itself constitutes a sort of prison. Thus, the injured, the orphans, the martyrs—civilian or otherwise—all become 'prisoners of war.' Expressing the ideas that inspired this series of paintings, Baran explained: This time, I was working on the victim being the hero of the exhibit, where there are no gladiators, only victims.

Iraqi-Kurdish painter and sculptor Serwan Baran was born in Baghdad in 1968. When he was just two years old, the Iraqi army began launching military operations to suppress the movement for Kurdish autonomy. As he notes, his country has since continued to be a theater of uninterrupted violence. Baran fled to Amman, Jordan in the aftermath of the 2003 American invasion of Iraq, a moment that marked a decisive juncture in his career and artistic identity. As Baran has delineated, his work became "more emotional and expressionist" as he began to grapple with his own collection of experiences as a conscripted soldier and "war artist" throughout the 1980s and 90s. Yet, as he is keen to make clear, his art "his a reaction to war, not a chronicle."

In his exhibit "Fatherland" for example, Baran comments on the masculine and paternalistic dimensions of politics and warfare in Iraq by highlighting what he calls the "chauvinistic image of strength" that dictatorial leaders have historically projected "hrough brutality and dominance." His large-scale paintings, which have arguably become his signature medium, provide the locus in which he exorcises the horrific scenes and images that have accumulated in his consciousness. As he readily acknowledges, however, it is a process: I am repeating the shock over and over again, to rid myself of the nightmare. Baran currently splits his time between Amman and Beirut, Lebanon.

February 21, 2020 | THE DAILY STAR
Rendering the harsh reality of war
Previous
Next
SHARE