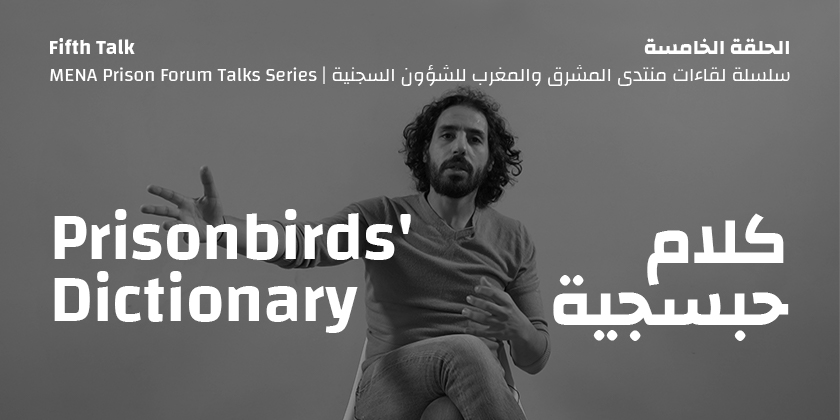 Talks: Organized by MPF and UMAM D&R
PRISONBIRDS’ DICTIONARY
A Conversation with Ahmad Said
Via Zoom

On September 30, 2021, the MENA Prison Forum (MPF) hosted Egyptian writer, activist, physician, and ex-prisoner Ahmed Said to discuss his book “Prisonbirds’ Dictionary: An Outline of Egyptian Prison Lingo.” The book is the fifth log among a series recently published by MPF. Based on his personal experience in Egyptian prisons and years of research, Said collected and compiled words and expressions that prisoners employ during their everyday lives and interactions. Importantly, the log comes as an extension of an earlier project by UMAM D&R to collect expressions, phrases, and words used by prisoners in Syria. The 2012 collection of UMAM D&R was published as a dictionary entitled Keys of the Syria Prison. The collection came up in conversation with Ahmad Said in 2019 while discussing his experience of imprisonment in Egypt. During one of the MPF regional meetings in May 2019, Said showed interest in making sense of the slang and terms used in prison imaged as “keys” to understand how prisons in Egypt function. Following an invitation by MPF co-founder Lokman Slim, Said set out to develop his own dictionary of prison terms he knew from his time in prison.

During the talk, it was interesting to note how some of the words mentioned in Said’s book were difficult to understand both by the Arab audience in general and the Egyptian attendees in particular. Furthermore, some of the words were not fully grasped even by Egyptians who habituated Egyptian jails during the previous few years. This reflects not only the particularities of prison words and worlds but also the frequently changing conditions that accompany the structure of sites of incarceration in Egypt. In other words, constructing a prison’s dictionary should be regarded neither as inclusive nor comprehensive with respect to cultures of incarceration in Egypt:across time and space, cultivating a prisons’ lingo will remain an ongoing and open-ended project that will last as long as jails exist.

In a similar vein, Said noted that his interest in exploring a language for prisons comes in light of the large waves of mass detention that followed the 2013 coup in Egypt. Because the increasing number of prisoners could no longer allow the separation between the so-called ‘political’ and ‘criminal’ prisoners, the two groups had to form a common language since they did not share spaces before their imprisonment. Hence, Said’s book follows the argument of Laleh Khalili and Jillian Schwedler in pointing to how “the very categories of crimes and criminals are social constructs that are over-determined by the constantly changing mores… the particular socioeconomic conditions…and by the definition of politics itself.” Put differently, because the ‘political’ is also considered a ‘criminal’ before state institutions, they have to live together and find means of communication while sharing food, drugs, leisure, physical abuses, emotional breakdowns, insults, sexual desires, and dreams of freedom.

In her comment on Said’s talk, scholar and intellectual Hana Jaber specifically referred to one of the subtitles of the book “Inside Prison, Out of Control.” She noted how the development of a language understood (only) by prisoners is a mode of resistance not only to their jailers, but also to the ‘outside’ world from which they are excluded. In this regard, Said added how co-inmates continue to share the words they nurtured during their detention following their release. Such a language becomes a secret code or a nuanced dialect by which the prisoners can build upon their earlier friendships and also enmities. It is a language by which ex-prisoners express their refusal and unwillingness to integrate into their societies and their mainstream, official languages.

Following Jaber’s remarks, the participants began to share different ideas and ways by which prisoners communicate across and beyond the Middle East. They debated the necessity of researching and writing about the language of the prisoners. Understanding prison lingo is crucial to stepping closer to the political and economic aspects of the prisons. However, like how literary scholar Sharea Taleghani highlighted in an earlier talk with the MPF about the genre of prison literature, we should avoid the fetishization and commercialization of prisons and its repressive practices, ultimately legitimizing the reproduction of carceral forms. In other words, the role of a prisons’ lingo is not to further marginalize prisoners, but to take care of and curate consistent conversations with their voices, feelings, and struggles.

In conclusion, Said’s book builds upon the metaphor of the keys, envisioning them as on a chain with one end marked by his prison memory and left open at the other end, extended as an invitation for others to contribute and add to his collection of terms. His talk additionally explored the role of language in prison and its function in a system of overbearing control. Against this backdrop, the MENA Prison Forum asks interested scholars, researchers, and writers to submit contributions for the prisons’ lingo sections on the Arabic and English pages of its website.