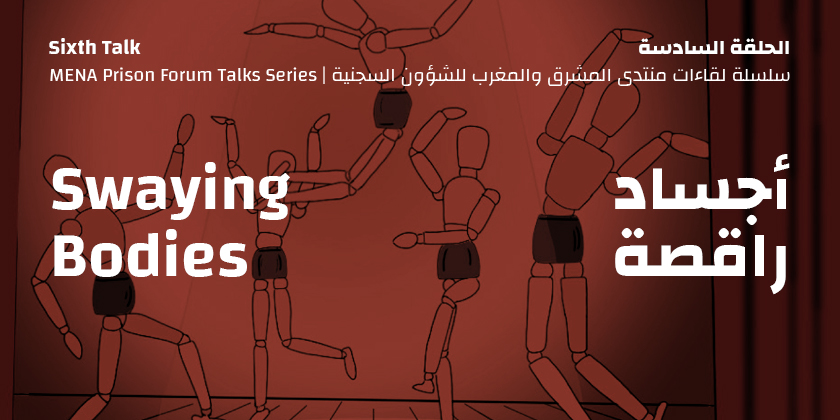 On October 21, 2021, the MENA Prison Forum hosted Egyptian journalist and writer Ahmad Abdul-Halim to discuss his novella “Swaying Bodies.” Supplemented with illustrations by Syrian artist Dima Dali, the novella is the fourth log among a series recently published by MPF. Born in 1995, Ahmad Abdul-Halim wrote “Swaying Bodies” as a description of prison experience. While Ahmad claims that the work is fictional, the visceral and sensory descriptions in the text render the reader deeply affected by the conditions described. Abdul-Halim’s words are additionally strengthened due to their accompaniment by illustrations of Syrian activist and painter Dima Daly. Whether this work is one of true fiction or a masquerading testimony of personal experiences, the reader is shown how prison ordeals indelibly change those who experience them.

During the talk, the attendees confirmed that the text of Ahmad is a unique text in the literature of Arab prisons. Its uniqueness lies in the fact that it did not specify to its reader what the nature of the prisoner before us is. Is he a political prisoner? or criminal? Instead, we are in front of prisoner scenes par excellence, which are carefully drawn from the first moments, passing through a complete experience of the prisoner and his environment. The text begins with a general representation of the prisons and then diminishes in size to reach specific details of an individual prisoner’s condition. Ahmad describes him as “hazīl” (weak), and this word is not intended to describe his body per se, but also his positioning before the prison system and its gigantic structure in which the prisoners are equal, whether in their daily nakedness or the insults they receive in a consistent manner.

The spectacle of watching the prisoners from the beginning intimidates the readers without an introduction, which makes them also eavesdroppers on the prisoners. The prison is seen as a visual freezing of life and then a rearrangement of it according to specific rules, punishment and various means of violence. A person enters prison as a person before turning into a number, which has the function of considering the prisoner as a component of a specific and arranged digital system. This system is also connected to the engineering progression of the prison, that is the anatomy of time and its accurate management. Hence, eating, drinking, and using the toilet becomes training for raising the prisoner’s body on a lifestyle where the self is fused with the orders of the wardens.

Ahmad’s text is comprehensive and heavily focuses on the body and its disciplinary techniques, which makes it a good starting point to grapple with the modern state and its judicial and security development. As Ali, one of the attendees noted, “we understand that the prison system is not, as many promote it, a system of discipline and reform, but rather a one of controlling and humiliating the body.” Accordingly, while sexual practices such as masturbation and same-sex relationships are condemned abroad, they take a unique position inside prison. Touching one’s body or other bodies present a re-discovery of negated organs and a resistance to their controlling via numbers in addition to the linguistic violence they encounter on a daily basis.

In a similar vein, the names of the novella chapters are basically related to a place, condition, or class related to the human body and its experiences. The first chapter is entitled “Theatre,” the second is “Naked,” passing through the “Barrel” to “Soap.” Hence, the illustrations of the chapters are not just pictures, but they are defined by darkness in which the prisoner tries to explore his body parts and adapt to their spatial and temporal constraints. For example, we see how the prisoners’ success to excrete reflects his body’s victory over a previous refusal to get rid of its rubbish. By getting closer to what the ‘outsiders’ of the prisons would usually take for granted, the readers of the novella figure out nuanced and unique meanings of agency, resistance, and strength among the prisoners.

Ahmad’s novella presents snapshots in which the soul of the prisoner disappears and the mechanism of the body appears. As Ahmad writes, the purpose of the prison is to keep the prisoner neither dead nor alive, but a machine that obeys the rules and accepts all sorts of humiliation. Through the novella, the reader makes sense of the prisoner’s struggle not only to secure for himself some kind of a human life but also to take the decision to put an end to his life. While Ahmad did not tell us if the prisoner really committed suicide in the chapter “Death,” the prisoner’s struggle between staying alive and taking his own life is a unique moment where the imprisoned body is able decide its own fate.