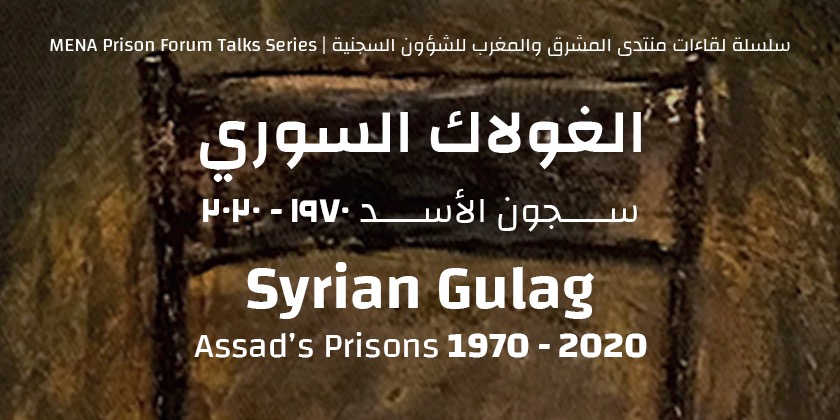 On Thursday, December 9th, the MENA Prison Forum hosted an online talk on the forthcoming book “Syrian Gulag: Assad’s Prisons, 1970-2020.” The talk was between co-authors Uğur Ümit Üngör and Jaber Baker, with commentary from Dr. Anne-Marie McManus. The talk entailed both authors on the findings of the book and the process behind its development, with a lively Q&A and active chat both with questions and comments from the 60+ attendees, highlighting areas for further conversations and work.

Mina Ibrahim, in his introduction to the talk, noted that prisons in Syria have always been at the center of UMAM D&R’s work: UMAM D&R has focused on language development within Syrian prisons with the publication Keys to the Syrian Prison, and UMAM co-founders Lokman Slim and Monika Borgman also produced a documentary on the Syrian prison Tadmor.

In the session, Dr. Üngör began with how he and Mr. Jaber met: in a chance encounter at the Syria bookstore Pages in Amsterdam, where Mr. Jaber was presenting his book on Hospital 601 in Syria, a hospital-turned-cog in the Assad regime’s detention, torture, and killing system. They began the five-year process behind this upcoming book, combining Dr. Üngör’s experience as a Professor of Holocaust and Genocide Studies at the University of Amsterdam and the NIOD Institute for War, Holocaust, and Genocide Studies, and Mr. Baker’s work as a researcher, documentary filmmaker, novelist, and human rights activist. Between 2002 and 2004, Mr. Baker was also imprisoned in Saydnaya military prison in Syria.

The motivation behind this work was one of consolidation: they identified that there did not exist one book that covered all prisons in the vast prison system in Syria, while such information can be found scattered throughout memoires, novels, long-form articles, but not collected into one resource. Dr. Üngör provided a brief overview of the book structure and contents, which correspond to four categories of Syrian prisons: intelligence branch prisons, military prisons, civil prisons, and secret prisons. He provided examples of each and light analysis of the role each plays in the system: often the prisons run by the intelligence branches are the entrance to the prison system for individuals, while the civilian prisons are often prisoner’s last stop before they are released (if they are released). He noted the relatively recent nature of the secret prisons, as they have proliferated largely in the past decade under control of militias holding detainees, and that they tend to be set up in innocuous locations, re-using houses, apartments, schools, industrial buildings for their detention.

Dr. Üngör took a moment to note the word choice and intention of the title: the reference to Stalin’s gulags evokes a) the “archipelago of prisons” spread all over the country, b) the prison system is a core defining feature of the Assad regime, and c) the impact of the system of prisons on the whole Syrian society. Indeed, when Dr. Üngör spoke about the prisons across the four categories, he presented a map of Syria with prison locations marked upon it, visually showing the net-like nature of the various types of prison locations that cross-cross the whole country.

The central research questions of the books were around the use of the prison system to build the Assad regime’s power, both in the past and currently, and how did and does the prison affect Syrian society broadly, even for those who have not experienced it directly. An additional question aimed to call to attention the often-overlooked analysis of a key role in prison systems: that of the “perpetrators” and how they function in the system. Vital to our understanding of the system is the core tenant that the prison system is not a means to an end, it is an end in itself, and the system has become a self-fulfilling structure and industry, upon which people rely for employment, and have vested interests in continuing to maintain the system and to keep the prisons occupied.

Mr. Jabar provided insights into his own personal and national concerns with the Syrian prison system, stressing that the entire country of Syria can be considered a prison. He echoed Dr. Üngör’s statements that the impact of Syrian prisons has reached other countries, noting that it is very common to find Syrians in other countries who have experience or knowledge of the Syrian prison system. He spoke about the data collection process for this book, noting that they collected testimonies from 85 individuals about their experiences in Syrian prisons. Mr. Baker spoke also about the immense challenge of transcribing interviews of this nature, and the struggles to accurately capture in words the sentiments and emotions shared by those who experienced the prisons.

Dr. McManus offered some comments on the authors’ presentation, speaking about how the book will be a great opportunity for researchers and activists to further explore Syrian prisons, and stating her appreciation of the authors’ respective backgrounds, and how they complement and work with one another. She offered several questions and areas for further discussion, related to the methodologies of their research and the steps they took while forming relationships with their interviewees and interlocutors. In the Q&A there was opportunity for the authors to speak more about their research methodology and how they verified data, and they shared that they found people who could corroborate in some way the experiences and stories they were told: either by people who directly were incarcerated with the individuals spoken to, or by people who witnessed their release and aftermath of the prison. They additionally corroborated facts from survivor testimonies, witness testimonies, and leaks from within Syria to verify and select information. This element of data and source verification was contextualized by Dr. Üngör, who compared the currently timeline of uncovering dynamics of the Syrian prison system with the timeline after the Holocaust; with Syria, he states, we are currently around the 1950s, at which point those who survived the camps had been released for only a few years, and evidence, conceptualization, and public awareness of the issues and dynamics were just starting. This is a key point both authors stress heavily: this book is just a starting point, and the time we are in is just the beginning of a process unpacking and understanding the Syrian prison system. This was echoed by the comments offered by Dr. Anne-Marie McManus, who noted that book talks usually have an air of conclusion or finality about them, as the book has been written and is being published, but instead, this talk was really about a starting point for work on this topic.

Uğur Ümit Üngör is Professor of Holocaust and Genocide Studies at the University of Amsterdam and the NIOD Institute. He has published books and articles on various aspects of genocide, including the Armenian Genocide.

Jaber Baker is a researcher, documentary filmmaker, novelist, and human rights activist. Between 2002 and 2004 he was imprisoned in Saydnaya military prison in Syria.

Anne-Marie McManus is a comparative literary scholar of Arabic, English, and French literature in the 20th and 21st centuries. She currently oversees the ERC-funded project SYRASP at the Forum Transregionale Studien in Berlin.